If you are a car performance enthusiast (aka “gear-head”) then you know that there’s quite a few ways to squeeze more power out of your car. One of the easier methods and one that gets a lot of press is to install a “Cold Air Intake.” You may have seen these devices either on the web or maybe mounted in someone’s car. They generally take the form of a long plastic tubes with a cone-shaped air filter on one end. The idea is that you place the air filter end somewhere under the hood where cooler air exists. After all, cooler air makes a car go faster, right?

How does that work?

Let’s start with how car engines operate.  An internal combustion engine needs oxygen from the outside air to burn during the combustion cycle. Cool air is denser than hot air and thus has more oxygen in it per unit volume.  So, when cool air burns in an engine, more oxygen is available to react with the gasoline, so the engine produces more power. 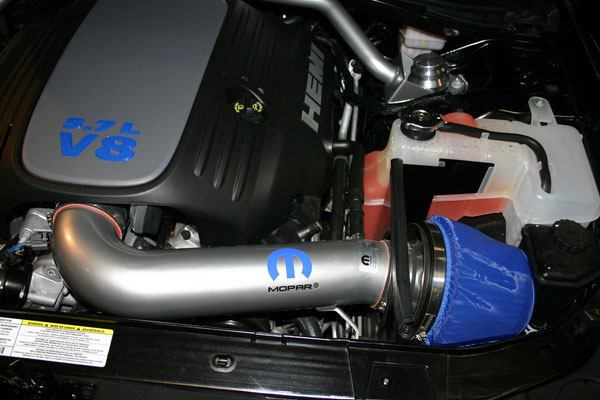 The problem is that most of the air in the engine compartment of your typical car is quite a bit hotter than the outside air. According to our tech expert at Button Dodge of Kokomo, a local Chrysler, Dodge, Ram, Jeep dealer in Kokomo, IN, it can be up to 50 degrees F hotter under the hood! The key is to allow cooler air to flow into the engine and that is what cold air intakes do. If mounted properly, say in the front of the engine compartment, the engine will draw in outside air that is far cooler than the air that is near the hot engine.

By the way, this cool air phenomena is exactly the same concept behind hood scoops. Hood scoops aren’t very common today (primarily for styling reasons) but their purpose is to also draw cool outside air into the engine. They offer a second benefit too. Because they stick out of the hood right into outside air flow, they have a ram effect where by the air is driven into the engine’s intake. This increases the engine’s power just a little more too.

Where do you get them?

Cold air intakes are available on the web and are stocked by some of the bigger automotive parts chains. Note that you will see a lot of inexpensive ones on Amazon that seem very attractively priced. While technically these inexpensive intakes will work fine, they won’t be of the quality that some of your premium manufacturers offer. A couple of the big names in the business are K&N and Pipercross. These guys have been in business for years. Let’s take a look at each one.

K&N Air Filtration was founded in Riverside, California in the early 1960’s by Ken Johnson and Norm McDonald. Back in the day, Ken and Norm sold motorcycle parts to several factory race teams and by virtue of that business, identified a need for better performing air filters. By the late 1960s, they had grown into a large company and the manufacturing of air filters became their primary focus. Today, with over 5000 products, K&N Engineering is the world’s leading manufacturer of air filters and air intake systems.

Based in Northampton, England, Pipercross has been making high performance air filters for the professional racing marketplace and domestic markets for over 25 years. Because of a focus on high performance applications, the company has developed some of the most technologically advanced filters available.

Although there is a lot of good marketing hype out there, it is important to realize that the power increase that you will gain from a cold air intake is real but is modest. A cold air intake won’t add dozens of horsepower to your car. On the other hand, it will add a few horsepower and is an add-on that is well within the expertise of the average DIYer. Costs are reasonable too. If you are looking for just a bit more power out of your engine, a cold air intake system is a good choice.