There are people that just have a calling. Some want to become world-class architects, some enter medical research to cure cancer, and then there are some that just want to drive hot tubs at high speeds. This story concerns the latter. In 1999, two Canadian engineers, Phillip Weicker and Ducan Forster, took a 1969 Cadillac DeVille and built it into world’s fastest hot tub. But before we go into the details concerning this amazing advance in automotive engineering, let’s travel back to the very beginning. 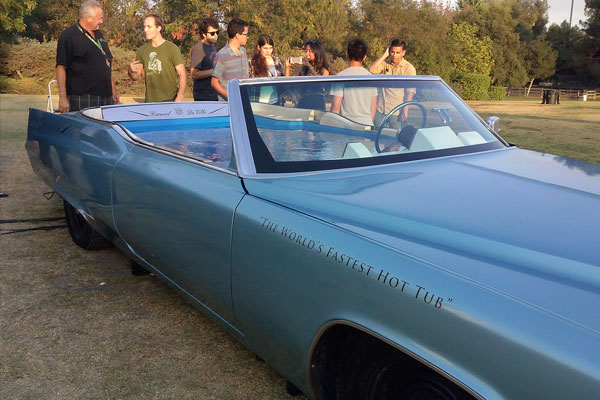 It all started back in 1996 when Weicker and Forster, were attending McMaster University in Hamilton, Ontario, Canada. Presumably after drinking a lot of Molson beer, the two engineering students became inspired by the famous Ernest Hemingway quote that states: “Always do sober what you say you’d do when intoxicated.” Empowered with inspiration from the great author, they planned to build what was considered impossible. This, of course, was taking an abandoned convertible left on campus (a 1982 Chevrolet Malibu) and turning it into a hot tub – a fully-operational, fully-drivable hot tub.

It wasn’t long before the work began. With the help of other presumably misguided engineers, Weicker, Forster, and team completed the project in just a few months. It didn’t look like much but it worked and was officially nicknamed the MK1. As you can likely imagine, it didn’t take long before MK1 became a well-known entity at McMaster University and was the focal point of many festivities (read: raucous parties and fraternity bashes.)

Fast-forward several years and Weicker and Forster have graduated from McMaster University and both are working as professional engineers. For both, life is comfortable and work is rewarding. Then it happened. The urge to make it “bigger and better” reared its ugly head and thus began the “The Carpool Deville” concept. And, no longer did they have to utilize an abandoned car for a mobile hot tub, now they could afford to build the very best.

The first thing Weicker and Forster did was purchase a ginormous 1969 Cadillac DeVille. This land yacht was one of the biggest convertibles to ever come out of Detroit and it was perfect for their project. First, they removed the interior and an elaborate custom fiberglass tub was installed. To drive the vehicle, a marine-style steering wheel, gauges, and throttle controls were fitted into the dash. The factory-installed 427-cubic inch V8 was fully rebuilt and modified to perform two important functions.

The first, of course, was propelling the DeVille around and second, the exhaust manifolds were modified to heat the pool water. We asked our technical consultant at Len Stoler Lexus of Owings Mills, a local Lexus dealer in Ownings Mills, MD, how this technical trick was accomplished. He explained that this was relatively easy. Weicker and Forster probably installed the exhaust manifolds from a V-8 boat motor because they are built with internal channels to funnel off engine heat. This heated water would then be used to heat the car’s hot tub.

Since the completion of the Carpool DeVille, both engineers have become minor on-line celebrities and emblematic of what can occur when you think creatively. Those who said that “a fast hot tub was just a dream and could never be created” were proved wrong – very wrong. Let’s face it, these two persistent engineers have made automotive history. Ok, it’s sort of weird history, but it’s still history.  Hey, the guys at Ripley’s just love it.