Previous to WWII, the US military was relying on Dodge to supply them with their large trucks. They were using half-ton, three-quarter ton, and one-ton trucks. Dodge supplied them in either 4×4 or 6×6 for the one ton trucks. These Dodge trucks were the best made in America. 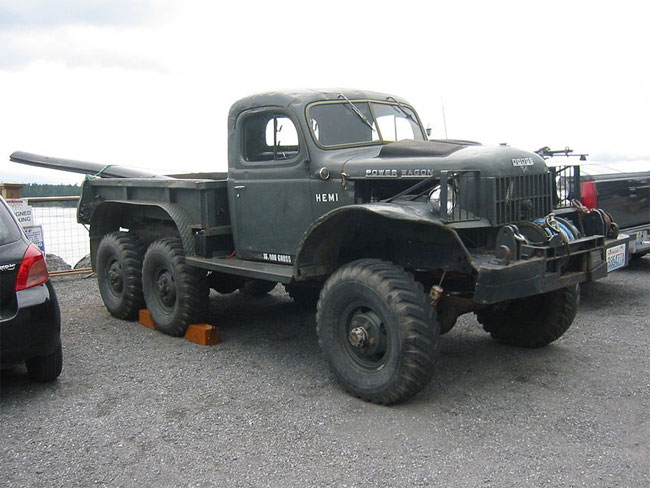 The needs of the US military changed dramatically on December 7th, 1941 when the Japanese attacked Pearl Harbor. On Dec 8th, Roosevelt declared war, and congress immediately allotted $50 billion to be used to fund the war.While the army scrambled for Jeeps, Dodge focused on trucks.  One of the Dodge built trucks was especially unique. It was a heavy duty pickup truck that was dubbed “The Battle Wagon.”  According to the folks at McLoughlin of Milwaukie, a Chevrolet dealer, by the time the war ended in 1945, Dodge had built an amazing 226,776 of them.

Once the war was over, the troops returned home to their farms and businesses.  Among other tools and supplies, they needed work trucks that were durable and reliable. Because so many veterans had a hands-on relationship with Dodge’s Battle Wagons, they wanted their own for work. Dodge didn’t make a civilian version but after several months of being swamped with requests, they started a crash program. March 1946, the first trucks arrived at dealer showrooms, and they were dubbed “Power Wagons.”

The Power Wagon was a unique creature and contained a myriad of earlier Dodge truck features. The step-side bed and cab came from the 1939 commercial-grade Dodge pickup, the flat fenders were repurposed from even earlier models. Inside the power wagon was no-nonsense with rubber floor mats on the floor and a heavy vinyl bench seat. Outside the front end and hood looked most like the military versions equipped with an eight-foot bed.Power came from their trusty230 cubic inch, straight-six engine. With a four-speed manual transmission, it could easily haul a 3,000 pound payload. And, it was the first factory-built civilian pickup to offer a real four-wheel drive.

When the Power Wagons hit Dodge dealers, they were a big hit. Sales were so good that few changes were made until 1947. Dodge wanted to modernize the Battle Wagon and in 1937 added a heater, dome light, sun visor, arm rest, and beefy 10,000 pound winch. In 1951, a number of mechanical upgrades were made to make the wagon even stronger but sales had began to taper off.  The reason was that Ford and Chevy were selling more modern pickups that were far more civilized and stylish.

By 1956, Dodge introduced the W100 and W200 Power Wagons to the country. These more modern, four-wheel drive, V8-powered wagons kicked off a national trend.

Dodge stopped using the Power Wagon name for its heavy duty trucks in 1981, but revived it in 2005 for an off-road focused Ram 2500 pickup. The name carries on today just as a trim package, a far cry from its Battle Wagon days . But it doesn’t matter, the name Power Wagon  still carries plenty of cache.