Once upon a time, winning NASCAR translated into big time car sales. This was during the late 1960s and early 1970s and the car race was NASCAR. Back then, NASCAR cars had to be “stock cars” or vehicles that could be actually bought at car dealerships. And when one of those cars won a Sunday NASCAR race, sales went through the roof when dealerships opened up the next week. The mantra was “Win on Sunday and sell on Monday.” 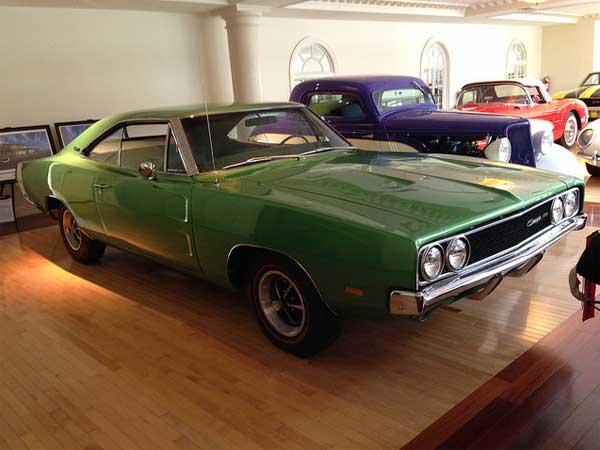 During this time Chrysler Corporation jumped in with some powerful cars designed purely to win at NASCAR. While pushing the bounds of what could plausibly be called “stock” cars, the companies raced—and sold to the public—some of the most unusual cars ever built in Detroit. Just take a look at the Plymouth Super Bird for a good example. It was a car that was built to win at NASCAR.

However, the sale staff at Sheboygan Chrysler in Sheboygan, WI, a full service Chrysler, Dodge, Jeep, Ram dealer, explained to us that there was another MOPAR car built to win at NASCAR – the Dodge Charger 500. It started in 1968 when Dodge had released a new body style for the Charger. It won lots of awards, sold well, but didn’t perform well on the racetrack. Aerodynamic analysis suggested making grille flush with the leading edge of the hood and filling in the concave rear windshield cavity. Wind tunnel tests confirmed that this would make the car significantly faster.

When the wind tunnel tests confirmed improvement, Dodge gave the go-ahead for five-hundred Chargers to be made and sold to consumers. Called the “Charger 500,” the car was unveiled to the press in June 1968 and then pitched to the NASCAR with a front spoiler added. Initially, NASCAR didn’t like the front spoiler because it was an aerodynamic modification which made the car look more like race car and less like a street car. After some discussion, though, the front spoiler was allowed.

A memo went out July 18, 1968 to Dodge dealers, telling them the 1969 Dodge Charger 500 would be available in very limited numbers. Initially, dealers were told the car would only be available with the 426 Hemi V8. Base price for the Charger was $3,843 and adding the 426 Hemi would bump that up by $648. Today, many experts think the cars were sold at a loss just to get a powerful “stock” car allowed at NASCAR. Unfortunately, the Charger 500 did not dominate or compete at the level Chrysler had hoped.