Back in the early 1980s, Chrysler was the only one of the big three automakers that did not have a diesel engine in their model lineup.  In 1978, General Motors offered a 350 cu.in V8. in their Oldsmobile line.  Ford followed in the early eighties with an International Harvester 6.9L V8.  In 1982, Chrysler jumped in and sourced their first diesel from Mitsubishi. It was a 4.0 liter, in-line six diesel, which was thrifty and reliable, but at 105 hp and 169 lb-ft of torque, it was considered relatively underpowered.

However, it proved popular enough that the company realized that needed a diesel permanently in their lineup, just a much more powerful one.

The solution to the problem came in the form of the Cummins B-series 6 cylinder engine. Cummins had a stellar name in the commercial equipment business and the engines were designed to be rock-solid.  The timing was good too.  In the mid 1980s, Chrysler was in the midst of retooling the truck line and Cummins was aggressively marketing their new medium-duty diesel engine line. A match made in heaven and in 1989, the Cummins B-series engine first appeared in the Chrysler’s new RAM pickup line. 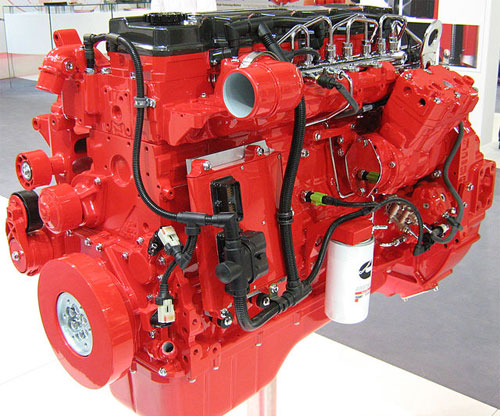 Interestingly, the standard Cummins B-series was far too much engine for the RAM trucks when the project first began. It had a potential torque output over 500 lb-ft in commercial applications and had to be detuned for the RAM trucks.   Although the horsepower of the resultant version, was 160 hp, similar to that of the Ford and Chevy diesels, the torque of the Cummins engine at 400lb-ft was far superior.  The sales result? The Fords and Chevys never had a chance.  The RAM trucks with Cummins engines were a huge hit and sales were simply off the charts.

The history of the Chrysler Cummings story continues today.  With  specifications that would seem inconceivable just a few years ago, the 2015 RAM HD trucks will offer the latest generation 6.7-liter Cummins Turbo Diesel with an Aisin six-speed automatic. Ready for this?  385 hp and an astonishing 850 lb-ft of torque. This is a very powerful engine and perhaps the ultimate towing machine.