“Unsafe at Any Speed: The Designed-In Dangers of the American Automobile” was the title of a work written by Ralph Nader. Nader was concerned about automobiles’ safety, and thus he wrote his book that was a non-fiction bestseller in 1966 after being published by Grossman Publishers.

The subject material was a look at the way the automobile industry viewed its responsibility to build safe automobiles. Nader’s book is often tied to a critical review of the Chevrolet Corvair, an air-cooled compact car manufactured in the 1960s with a rear engine. And while there was some focus on the Corvair, the book was an indictment of the whole industry. For example, Nader included chapters on lack of devices like seat belts, the pollution concerns from internal combustion engines, and the lack in many cars of safety testing at all. Nader’s book contained eight chapters total. 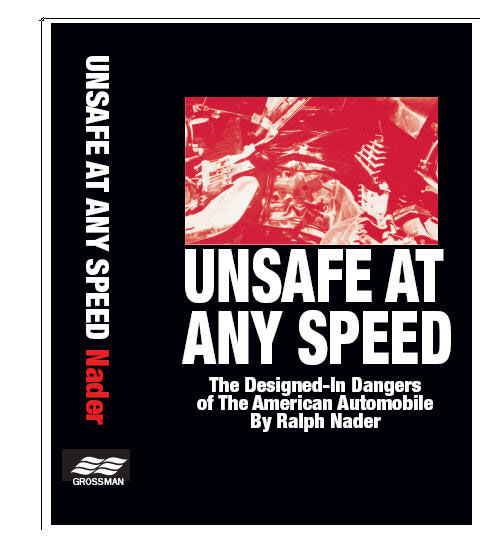 Worst of all, Nader’s writing explored the concept that automotive executives did not seem concerned about most of the dangerous problems involved with their vehicles at all. The last chapter of Unsafe, in particular, discussed the safety advocates’ battle, and how if nothing changed, that eventually 50% of Americans could end up be injured or killed in a car crash.

This book was a fact-filled masterpiece that vaulted Nader into a legal career of questioning the motives behind the policy and practice of the whole automotive industry. It would be safe to say that “Unsafe” dispelled the once famous comment by a General Motors executive that “What was good for General Motors was good for America.”

After “Unsafe” was released, a huge deal of change occurred. This book helped push the passage of the National Traffic and Motor Vehicle Safety Act of 1966. The book was painful but later, throughout the decades since its release, the auto industry should be happy that Nader published his book. By pushing for safety items that all carmakers were forced to adopt, the automotive manufacturers possibly saved millions of dollars in future lawsuits. Here’s a fact to consider: In 1980, 23 people out of 100,000 died each year in car crashes. Today, thanks to hundreds of federal safety regulations, that rate is less than 10 per 100,000.

“The auto industry wants to turn the car into an entertainment center,” says Nader, who has run for President of the United States on several occasions, recently commented. He insists that car manufacturers should make sure that their gadgets and accessories don’t interfere with the basic concept of safe driving, and he is quite concerned that all the multitasking that occurs in a car may be distracting.

We are convinced that the book wasn’t just the opinions of a curmudgeon, and it really helped out the automotive industry a great deal! Thank you to members of the sales team at Watters Autoland, a Buick and GMC dealer in Indianola, IA, for sitting down with us to discuss Nader’s contribution to the automotive industry!