For more than 100 years, German car giant Audi has been associated with producing some of the world’s most exciting and high-quality road vehicles. This should come as little surprise though, especially since the manufacturer’s slogan ‘Vorsprung durch Technik’ translates to ‘Advancement through technology’.

As showcased by events in London and Beijing recently, Audi isn’t looking to slow down with advancing vehicle technology any time soon… 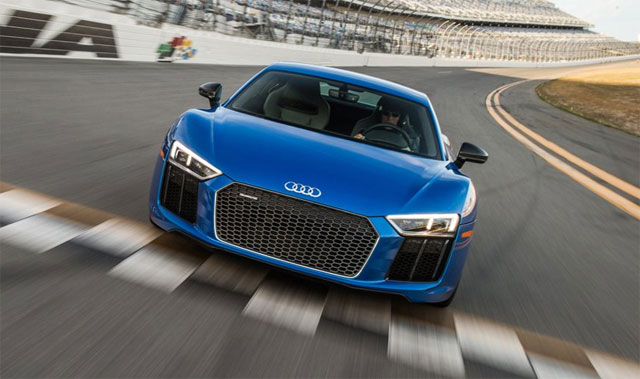 The many eye-catching features of the Audi R8 Spyder

Audi City London, an event held in Piccadilly on April 25th 2016, was the stage where the Audi R8 Spyder made its domestic debut.

Hailed by Audi as being ‘the new generation of the convertible super sports car’, it stands out from its predecessors for a number of reasons. They include all of the following:

The potent, mid-mounted ten-cylinder engine attached to the Audi R8 Spyder is capable of producing 540PS of power and 540Nm of torque at 6,500rpm. On the road, this performance translates to a car that is able to go from 0 to 62mph in a mere 3.6 seconds and reach a top speed of 197mph.

That’s not all. The V10 engine is naturally aspirated and is designed to improve fuel economy by 10 per cent by utilising a method called ‘decoupling’ wherever this is possible. In fact, the engine can distribute the drive depending on conditions to the point where 100 per cent is transferred to just the front or rear wheels.

The Audi R8 Spyder has a dry weight of just 1,612k, made achievable by the car being structured around a multi-material Audi Space Frame (ASF).

A mixture of aluminium and carbon fibre, the ASF has the benefit of being both lightweight and strong. As a result, the body of the R8 Spyder weighs in at an astounding 208kg and its torsional rigidity has been boosted by more than 50 per cent when put in comparison with the previous model.

Step behind the wheel of the Audi R8 Spyder and an intelligent control system will be at your fingertips.

With this technology in place, drivers can easily choose from a variety of driving systems—ranging from comfort mode to dynamic, dry, wet and snow modes — so that the car is always stable when going from A to B.

On the same day as the Audi R8 Spyder was being shown off in London, a new mixed mobility concept was being presented at Audi China 2016 in Beijing.

An urban compact SUV from the German manufacturer and based on the Audi Q3, the vehicle is designed to present enhanced mobility to young and progressive drivers when they are travelling through cities.

How is this achieved? By integrating an electrically-powered, multifunctional longboard onto the concept vehicle’s bumper.

This longboard, which is similar in design to a skateboard, will allow drivers to complete a commute by parking up their vehicle and then travelling through the city in one of three riding modes:

While we wait for the above concepts to arrive, be sure to check out these Audi offers to see how you can get your hands on some of the German manufacturer’s current standout technology for astounding prices.