A heavily camouflaged 2018 BMW 3 Series has been rooted out by spies and the pictures are making rounds of the online motoring world. It seems that BMW’s star performer is getting another upheaval for the upcoming 2018 model which is expected to be launched in 2017. 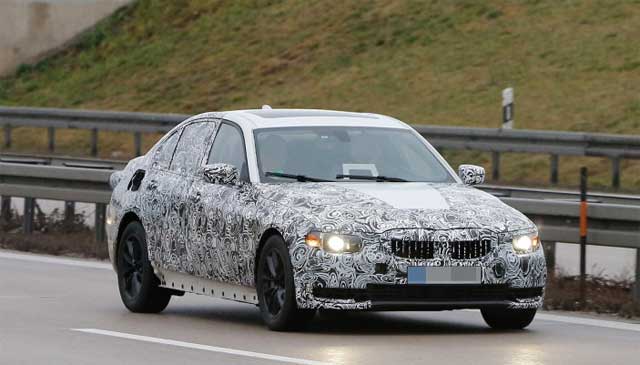 Despite the camouflage, it is evident that the front bears some resemblance to the latest 7 series. The signature BMW kidney grille is there, and the outer proportions of the popular sedan seem to be the same as the current model apart from the longer wheelbase which will make the interior a bit roomier. The front is also wider and lower giving the car a sportier look. The increase in size will not enhance the weight of the vehicle, as the 2018 BMW 3 series is expected to feature a lot of carbon fibre in its exterior.

The car is going by the codename G20 at the moment, and while interior pictures are not very clear, a whole host of infotainment options are almost certain along with the safety technologies seen in the 7 series.

The powertrains should remain the same: turbocharged 4 and 6 cylinder engines for the US, while other markets will probably see a 1.5 litre 3 cylinder also. There is a strong possibility of a diesel and a plugin hybrid with the latter utilizing the Power eDrive based on two electric motors.