You are probably familiar with soy. Most people are because soy is found in a lot of the foods that we eat and drink. Besides the obvious, like soy milk, soy sauce and soy nuts, soy is used in hundreds of other food products. But what might come as a surprise is that many of us sit on soy cushions (soy-foam) or have other soy materials (soy-based bioplastics) in our cars. What few people know is that Henry Ford, the founder of Ford Motor Company, would be especially pleased with soy products in his cars. To understand this fondness for this product is simple -the Ford family were farmers. 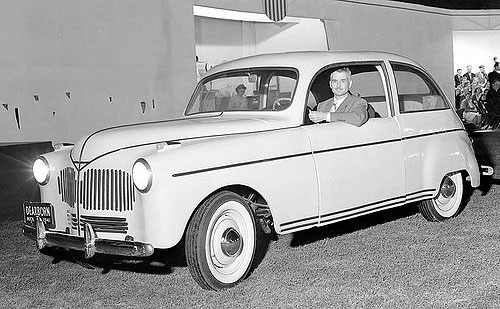 Henry Ford, born in 1863, grew up on a farm that grew a wide variety of crops, including soy beans.Being a natural tinkerer, young Henryfixed and modified most of the machinery on the farm and before long, he was make motorized vehicles. In 1896, Ford released a motorized “Quadricycle” and then launched the Ford Motor Company. Following a number of early models in the early 1900s, in 1908 the Ford Motor Company released the Model T-thecar most often credited with putting America on wheels.

When the Great Depression hit in 1929, Edsel Ford, Henry’s son,surmised that the public needed affordable vehicles but believed they still wanted comfort and style. This started a period of innovation in which Ford developed a number of new technologies and materials.One of them was especially interesting: a plastic material made from soy beans.

Under the direction of Edsel, this new plastic material was evaluated for use in Ford cars. This lead to a prototype “Soybean Car,” a plastic-bodied automobile that was unveiled by Ford Motor Company in late 1941. Just one was made.The car weighed just 2000 lbs. which was almost 1000 lbs. lighter than earlier steel cars. The ingredients of the plastic body panels were a special material that included soybeans, and small amounts of wheat, hemp, and flax.

The term bio-plastic is a very broad term that basically means a substance was derived from plant-based material, whether wholly or in part. Starch and cellulose are two of the most common renewable feed stocks used to create bio-plastics; these typically come from corn and sugarcane. Bio-based plastics are distinguished from much more common petroleum-based polymers. Our technical consultant, East Hills Chevrolet in Douglas town, NY, explained that bio-plastics have been used on many General Motors vehicles starting in the early 2000s. They can be found today in car interiors, undercarriages -and even under the hood.

What happened to the Soybean car

Only one was made. Unfortunately, the outbreak of World War II in 1941 suspended all auto production in the United States, and Ford’s soy bean-plastic car experiment was shelved. When the war ended in 1945, the idea of a plastic car fell through the cracks due to a focus on more tried and true materials such as iron and steel.Today, however, Henry Ford would be very pleased, though, because Ford Motor Company has achieved his goal of helping out farmers. It’s just that today, the soy goes into soy-foam, not into soybody panels.