There are three types of brakes currently used on today’s vehicles. The first is the conventional friction brake. Friction brakes are the type of brake that uses rotors (or a drums) and brakes pads (or shoes). The way they work is simple; when a vehicle needs to slow down, the driver steps on a brake pedal and the brake pads (or shoes) push against a wheel rotor (or drum); this action creates friction which slows the vehicle down. For the physics majors out there, the kinetic energy of the car is converted directly into heat which dissipates into the ambient air. And that’s the part that bothers engineers because that heat is technically wasted energy. 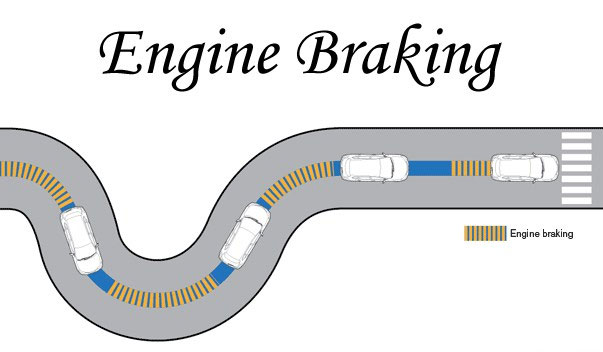 The second type of brake is the regenerative brake. These systems capitalize on the similarities in construction of electric motors and electric generators. An electric motor’s interior is made up of copper windings wound on an armature. It uses an electromagnetic energy field to produce torque. A generator is also comprised of copper windings on an armature and this allows it to produce electric power when it is turned.

In a regenerative braking system, the objective is to recapture the energy that results when the brakes are applied. When the brake pedal is pressed, the regenerative braking circuit switches the motor into “generator mode” so that it now operates in reverse to counter the direction of the wheels. The electricity developed is routed towards the car’s storage batteries to recharge them. (Note: at higher speeds, regenerative brakes still require the assistance of standard friction brake systems to be applied as a backup.)

The third type of braking system in common use is engine braking. Engine braking does not use any external resistance, such as electromagnetic or friction systems, to slow down a vehicle. It uses the retarding forces within an engine. This probably sounds mysterious but its simpler than you think. Both gasoline and diesel engines can be used to perform engine braking but the do it via different mechanisms.

When discussing engine braking with gasoline engines, we are talking about the effect that occurs when you take your foot off the accelerator. When you do that, your car slows down because your engine slows down.

The way this actually works is that when the accelerator is released, the throttle valve that controls intake airflow is closed and the air flow through the intake is restricted. This causes a high manifold vacuum which the pistons have to work against and this, in turn, slows down the wheels because they are driven by the pistons.

What diesel engine engineers have built is a unique device called a Jacobs Brake (Jake Brake.) The way they work is that the exhaust valves are opened at the top of the compression stroke, so the large amount of energy stored in that compressed air is not returned to the crankshaft.

Compression-release (“Jake”) braking is a very effective way to slow down a large diesel truck but it comes at a price. Jake braking is loud especially if there is no muffler on the intake manifold of the engine. In fact, the loudness of a jake brake is between 10 and 20 times the sound pressure level of a jackhammer. As a result, numerous cities, municipalities, states, and provinces have banned the use of unmuffled compression brakes.