If you live or work in an urban environment, you probably know that opening your left-hand door into traffic can be dangerous. Dangerous not only just for you but also for any bicyclists or motorcyclists driving by. And accidents are a pretty common thing. As matter of fact, the act of a biker being sandwiched between flowing traffic and an open car door is so common that our subject matter experts at East Hills Chevrolet of Roslyn, a local Chevrolet dealer in Roslyn, NY, informed us that the situation has been given a name: “Dooring.” 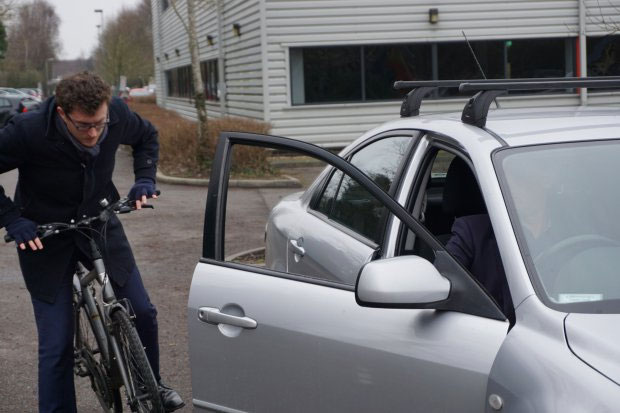 So how often does an accident involving dooring occur? A 2012 report found that there was roughly one dooring accident in Chicago every day of the year. And, unfortunately, dozens of these are fatal because when a cyclist hits the door, they often fly over it and land head first on the pavement.

Dooring is a serious problem in New York City. In an attempt to draw attention to the problem, the city recently announced a plan requiring all 13,000 city cabs to put a sticker on the back of their cabs that boldly states “LOOK! For Cyclists.” While this is a nice thing to do, most predict it will barely make a dent in the number of dooring accidents.

But there is hope. A technique to mitigate the phenomena of dooring was adopted decades ago in the Netherlands. It is called the “Dutch Reach.” Here’s how it works:

If you are sitting on the driver’s side of a parked car and want to get out, don’t open the door with your left hand as you’ve become accustomed to — instead, you open the door with your right hand. This simple motion causes you to pivot your entire upper body as you reach, changing your line of sight past by your rear-view mirror and out to the street behind you. (If you are on the passenger’s side, use your left hand instead of your right; the trick is just to use the hand furthest from the door to ensure an upper-body pivot.) By doing this, you avoid opening the door when a cyclist or other traffic is in your blind spot.

The Dutch Reach has been practiced in the Netherlands for decades and is still taught in driving schools throughout the country. As a result, the number of dooring accidents is a fraction of that in the United States.

If you would care to learn a little more about the Dutch Reach, head on over to DutchReach.org, a safety advocacy movement is trying to make the reach a mainstream behavior. On the website you will find plenty of resources for spreading the word, and a few slogans that could help you remember. Here’s a good one: “Reach, Swivel, Look, Open.”