It is a pity sight to see a supercar like McLaren 650S crashed in its early age. But this is what happens when you get overexcited seeing your new McLaren at your doorstep with a bottle of champagne in your hands to celebrate.

According to reports, a motorist in Essex bought a new McLaren 650S supercar for £215,000 ($265,000), celebrated the delivery with a bottle of champagne, drove it in celebration and smashed to the trunk of a hard tree damaging the major portion of the front and small portion of the rear after hitting a sign post. Sadly, this happened just 10 minutes after delivery. 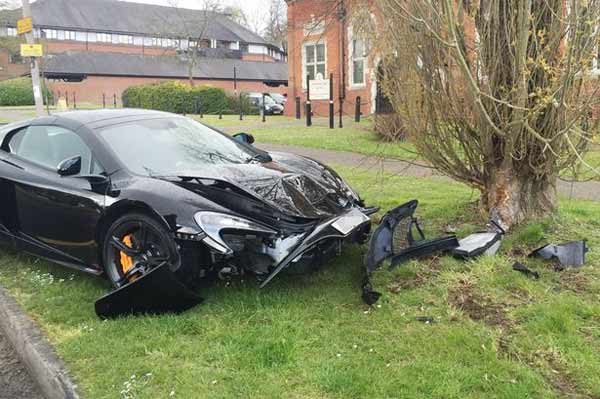 Essex Police are currently investigating the reasons of crash and the identity of the driver. From the crash scene, we can deduce that no one is badly hurt and the McLaren was safe enough to protect the lives of the occupants.

While we have sympathy for the poor chap who spent more than a quarter of a million dollars only to get a fifty thousand pounds repair bill (assuming the damage from the pictures), what caused the accident is obvious. The supercar comes equipped with a 3.8-liter twin-turbocharged V-8 engine paired with a seven-speed dual-clutch gearbox to pump out a whopping 641 hp and 500 lb-ft of torque to power the rear wheels. With this mighty power, it just takes around 3 seconds to reach to 100 km/h and attain a mind boggling top speed of 333 km/h. Apparently, the driver had pushed the pedal hard and couldn’t survive the fast sprint McLaren is famous for.

Here is a piece of advice; next time you buy a McLaren, make sure you know how to drive a supercar.