Spy shots of the Mini Cooper Crossover have been taken from a recent spotting of this upcoming car in the deserts of CA. This car is about to be released with its psychedelic paint scheme all across its body. These photos however have been able to bring out the best of looks of this brand new car.

The two prototypes of this new edition are not the same however. One of these models is naturally aspirated and the other is turbocharged. The trailing Cooper Crossover is a typical Mini grille with slants that are horizontal. It also has a fog light at each corner of its body. The prototype of the pack looks incredible. It has a mesh grill and lower air intake with two inlets. 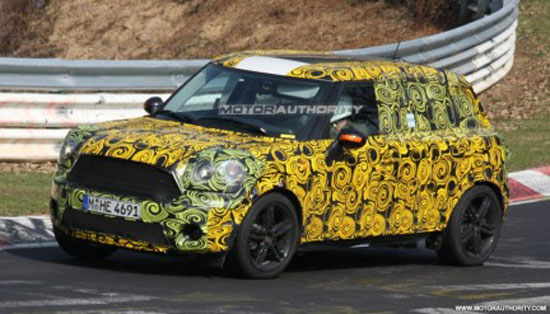 The Mini Crossover concept debuted at 2008 in the Motor Show in Paris. This new version is quite common with the standard Mini Coopers in design and structure but the body’s design stands out with the XL Clubman model.

There are extra pairs of doors that are quite akin to the usual Clubman models. The prototype features also have the rear lift gates as well as the swing style to the. All these make it an exceptionally coveted and beautiful model. It seethes with aura of the new generation.