The luxury car division of Nissan Motor Company has launched INFINITI CONCEPT Vision Gran Turismo for PlayStation 3 gamers. The design language of this concept is based on futuristic track racing approach. The Japanese automaker describes its Vision GT as ‘part beauty, part beast’.

The design is inspired from the 2014 Infiniti Design Competition, which was won by a Chinese design team. The initial design was hand-made that went digital for more accuracy and fine-tuning. Subsequently, it was hand-crafted again and went back to digital designing for final modifications. Surely, the Gran Turismo developers were consulted to make this concept virtually available for drive. 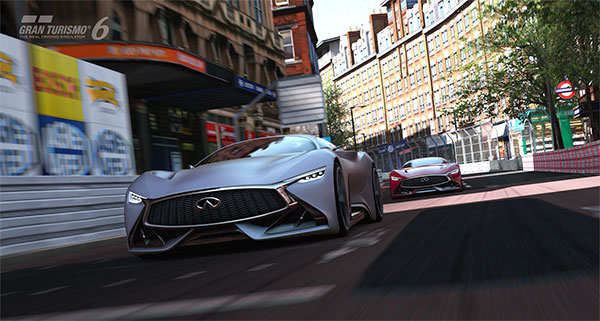 The INFINITI CONCEPT Vision Gran Turismo is not just a computer-generated concept. It involves real time calculations and dynamics. The virtual concept comes with under-floor air flow control, a cool large rear spoiler and front/back diffusers to prove its aerodynamic capabilities. However, the design seems very unusual and far away from becoming reality.

The new INIFNITI CONCEPT Vision Gran Turismo is available as a free downloadable content (DLC) for Gran Turismo 6. You can also take a virtual test drive if you are one of the 72 million gamers worldwide, who have purchased the GT6.