Honda 2013 Acura has already received better response in the past when the vehicle was launched for the first time at various international auto shows. Now, Honda Manufacturing of Indiana has announced that they have started with the mass production of the 2013 Acura ILX and that the first car officially rolled out the assembly line today. Jun Nishimoto, President of Honda Manufacturing of Indiana said that the car already has a great reputation in the market and that they are thrilled to have this car manufactured at the Greensburg facility. 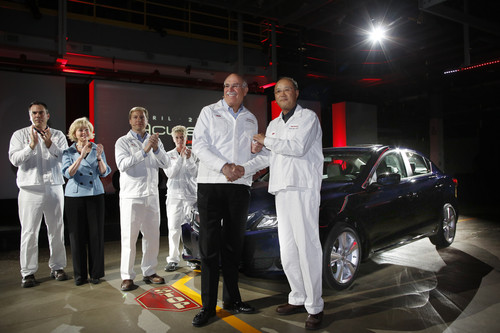 The new 2013 Acura will be among the best cars that Honda will be launching this year. The car comes in gasoline and gas-electric hybrid powertrain options. Honda Manufacturing of Indiana will be manufacturing three versions of the car. Acura ILX with 150 horsepower 4 cylinder 2.0 liter model, the second will be 210 horsepower 2.4 liter model with 6 speed manual transmission. The third model will be Acura ILX Hybrid which will be a 1.5 liter 4 cylinder engine.