Quantum physics met motoring madness when a man attempted to time travel on a Dodge Challenger by crashing it into a building. According to the police, he is uninjured and may be charged for reckless driving. 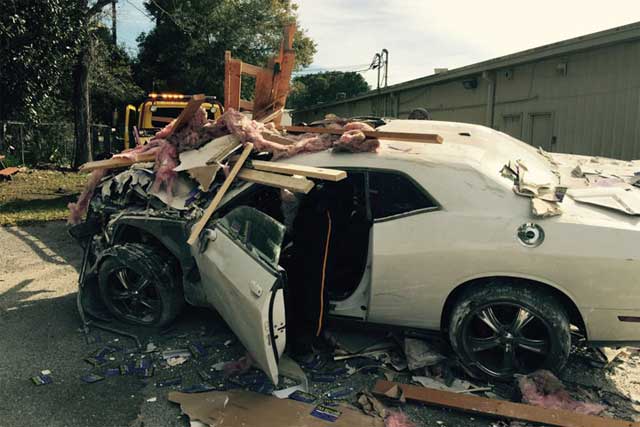 The driver rammed the late model Dodge Challenger into a strip mall at a very high speed and broke through the walls causing extensive damage to two local businesses: Advanced Tax Services and Pensacola Caskets. Fortunately, the incident occurred on the weekend and the offices were unoccupied. The General Manager of Pensacola Caskets is reported to have said that it appeared as a bomb went off.

Wear-TV published a photograph from the scene depicting the attempted time travel on the Dodge Challenger where the white sedan was shown covered with debris from the offices. Employees have been notified not to enter the premises until a safety evaluation is carried out.

According to a crash report, the driver stated he was driving at high speeds attempting to enter a time portal and did not leave the time portal until the car crashed. Florida police state that the driver was on his way to visit a family. He was taken for an evaluation after the accident and reportedly was not under the influence of alcohol or drugs.