The new Audi R8 Spyder V10 has been launched in certain European markets today, while the UK market has to wait a little longer for it, probably till the end of summer. The price of the R8 Spyder V10 in Germany starts at €179,000, while our guess for UK is about £130,000, which is £10,500 above its Coupé sibling. Once out, the Spyder will compete with the likes of Porsche 911 Turbo cabriolet. 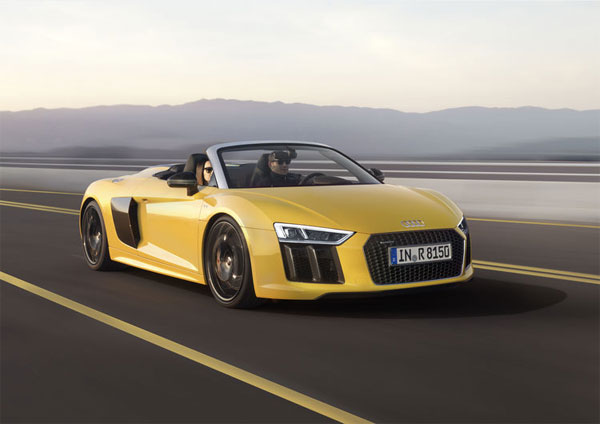 The new Spyder is undoubtedly more refined with added strength. The mid-engined car comes with an improved performance thanks to better overall rigidity and reduced curb weight. Moreover, it is 4426mm long and 1940mm wide, making it 14mm shorter and 36mm wider than the former R8 Spyder. Nevertheless, the 1,650mm wheelbase remains the same along with the car’s height.

The Audi R8 V10 Spyder has a naturally aspirated 5.2-liter V10 petrol engine which is capable of pumping out 532bhp and 398 lb-ft of torque. The engine is mated to a 7-speed dual-clutch automatic gearbox.

The more power hungry people have to wait till the end of the year to get their hands on 601bhp R8 Spyder.