The mid-sized four door Kia Optima sedan was first launched back in 2000 and achieved a moderate amount of success in the global markets. It is a derivative model of Hyundai i-40; the driving forces behind its development were smart designing and low costs of running. The Kia Optima 2016 has just gone on sale and claims to be more luxurious and pleasing to drive. It comes in 5 trims, the prices and some of the key features are mentioned hereunder:

On the outside, the front LED lights render better visibility accompanied by blended characteristic grille of KIA. The rear lights are comparatively slimmer with an angular touch to them. In the safety department, it extends seven airbags for enhanced safety, and the body has been crafted of superior quality steel to reduce damage done in case of collision. 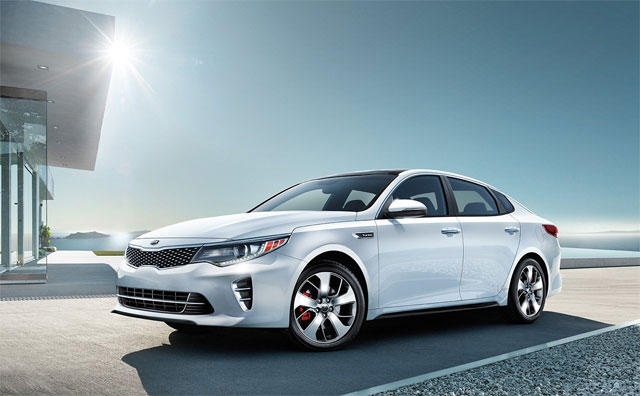 On the inside, the cabin has been re-designed with satin chrome accents. The 2016 Kia Optima also comes equipped with an 8” touch screen as a complete entertainment unit wherein you can connect your devices using Bluetooth technology as well.

The upscaling has helped the Kia Optima 2016 to look better than before. The Carbon dioxide emission level has been tested to 116g/km making it environment friendly.

The price in the UK starts from £21,495, while Optima hybrid version is also in the works.