Thinking about the 2010 Acura TSX V6? We tell you all the information. Well, it has been engineered with the intention of filling the gap between the four cylinders TSX and the somewhat new TL. The latest TL has, in fact, gone up market in many areas, and this TSX V6 wants to create a more comprehensive sporting version of the TSX.

The TSX V6 is much like the last year car’s interior, not many changes have been made apart from larger wheels, a V6 badge on the trunk, and a different compound on the rear brakes. On both cars, the dual tailpipes are the same size, and there haven’t been too many interior changes. However, this car has more power, which is felt and not seen. This car puts up good competition to the A4, 3 series and C-class cars. There is a 2.4 liter four-cylinder in the base TSX, which has 201 horsepower and 170 lb-ft. of torque. The 3.5 liter V6 in the TSX boosts its numbers up to 280 hp and 254 lb-ft, this gives it far better outputs than the sixers in the Mercedes C350, and the Audi A4 3.2. 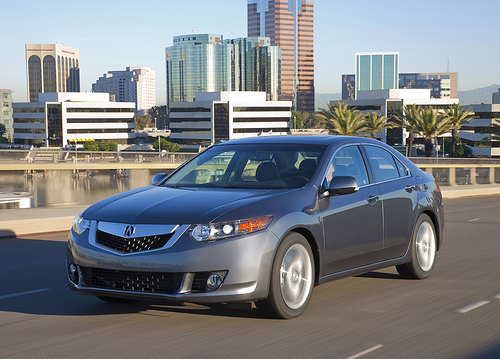 Not much has been done to the interiors, but the inside gives a good view, and there is much visual variety to speak of. There are many contrasting curves, which are overlaid with four different plastics treatments throughout, and perforated leather inserts in the door. It’s not totally attention-catching, but it’s the kind that would age well, a trait you don’t find too easily in cars of the luxury segment. The seats are wide and comfortable, and the side of the seats are thicker than a brick wall.

However, one thing we must mention is that the dashboard seems to have too many buttons – the steering wheel has 11 buttons on it, and 7 among those are of the multi-function type. The center stack is a button convention with 2 multi-function knobs, and all of this makes it a little complicated, especially when you’re driving.

The engine is sufficient, but it lacks grunt for the most part. However, the car does its job without much fuss, but all said and done, it’s not the kind of car that gets your adrenaline pumping. Acura has made an assertion that it isn’t about power, but it’s more about creating a sportier car. The TSX V6 models gains an additional 194 pounds, and the additional horsepower and torque offsets the extra poundage. There are new coil springs and damper settings in the car, which do a great job of keeping the road harshness away from the occupants of the cabin. Plus, there are electronically controlled engine mounts, and also Active Sound Control (ASC), which is a noise cancellation system that filters out certain frequencies.

If you take a hairpin turn, then you will get a serving of under steer, as well as a flashing yellow triangle, while the traction control works to keep the car righted. But the flashing yellow light is just by itself, there are no piercing whistles, no clampdown on the brakes, it’s just enough to keep you going over the road. The electronic power steering is rather good, you always know where to put the wheel when planning a line, and you don’t need corrections when you lay the course. The suspension leaps to its tasks when flying and also at town speeds and the wheels are kept where they need to be, even as the car is squatting and flicking to stay in its lane. However, the brakes tend to get tired a little early.